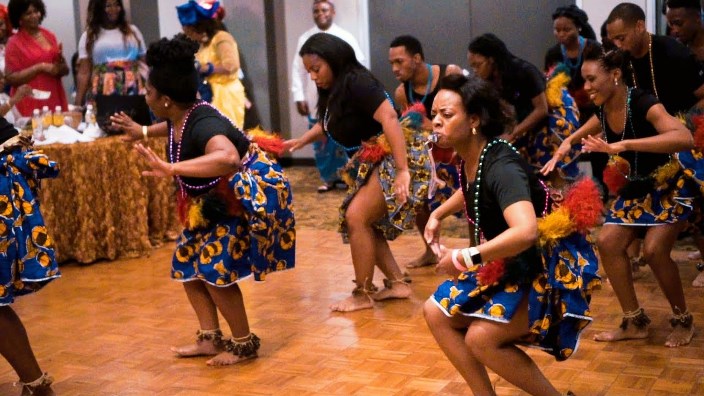 Ibom is an old word used by the Efik / Ibibio / Annang / Oron / Eket people of Nigeria meaning the universe, the earth, or a community.

Akwa Ibom is a state in Nigeria. It is located in the coastal southern part of the country called the Niger Delta, lying between latitudes 4°32′N and 5°33′N, and longitudes 7°25′E and 8°25′E. The state is located in the South-South geopolitical zone, and is bordered on the east by Cross River State, on the west by Rivers State and Abia State, and on the south by the Atlantic Ocean and the southernmost tip of Cross River State.

Akwa Ibom is one of Nigeria’s 36 states, with a population of over five million people. The state was created in 1987 from the former Cross River State and is currently the highest oil- and gas-producing state in the country. The state’s capital is Uyo, with over 500,000 inhabitants. Akwa Ibom has an airport and two major seaports on the Atlantic Ocean with a proposed construction of a world-class seaport Ibaka Seaport at Oron. The state also boasts of a 30,000-seat ultramodern sports complex. It is shaped like the Allianz arena stadium and it has modern and world-class facilities. Akwa Ibom state is also home to the Ibom E-Library, a world-class information centre. In addition to English, the main spoken languages are Ibibio, Annang, Eket and Oron.

The people of Akwa Ibom are predominantly Christian. The main ethnic groups in Akwa Ibom state are:

Akwa Ibom State is made up of a homogenous group of people believed to have originated from a single ancestral stock. The languages spoken in the state are closely related, and the Annang and Ibibio languages are mostly identical with a few dialectical differences. The Eket and Ibeno languages are more closely related to each other than to the other two, and are only partially understandable by speakers of the other two languages.

The Ibibio are the largest group, whilst the Annang, which form the second largest group, speak a language very similar to the Ibibio Language. Ibeno and Eket speak a similar language, and are located by the ocean. The Ibibio language belongs to the Benue-Congo language family, which forms part of the Niger- Congo group of languages.

The cultural similarity amongst the people of the state is also epitomized in folklore, songs, dances, food, beliefs and mythology. The people are predominantly of the Christian faith although some native African religions are in practice to some extent.

A modern leisure and business resort in the capital of Akwa Ibom, this multibillion naira entertainment centre is designed to comprise not just a six-screen Cineplex, a five-star hotel, wet and dry park, conference centre, but also a large shopping mall.

This is the iconic building where Lord Lugard, the colonial governor, amalgamated the Northern and Southern Protectorates in 1914, making Nigeria one geographical entity. It was also where cease-fire was declared in 1970 to end the Nigeria Civil War.

The museum houses some finest carvings, relics, artifacts and other valuable antiquities such as masquerade costumes, traditional/instruments, pottery. The museum also contains an attractive, shaded water front garden where you can watch small boats drifting on the creeks.

The Itu River was a renowned slave trade route and the old jetty still stands. There are a number of old prison-like warehouses where slaves were kept to await shipment via the Itu River. The main lodge was the residence of the white slave merchants who occupied the area. This is a one-story house, much complex and beautifully constructed.

This is a beautiful sand beach which stretches to James Town on the Atlantic, providing recreational facilities with excellent opportunities for water sporting. Other impressive beaches are at Eket, Ikot Abasi, Adadia, Nwaniba, Uta Ewa and Oron.

This is a one-storey cottage where Lord Lugard lived during the amalgamation period and it is located opposite the amalgamation house. This site was claimed to be the first administrative headquarters of the region before it was relocated to Calabar.

The forest Reserve is rich in wildlife, trees and indigenous plants.

The Presbyterian Church was built by the famous missionary Mary Slessor who stopped the killing of twins amongst the people of the region.

The monument which symbolizes the unity of the people of Akwa Ibom State, stands in the centre of the roundabout. It is a delightful art-piece, skirted with dazzling selection of uniquely beautiful flowers. The plaza has an open theatre, doubled-rolled water fountain with in the plaza, and shopping centre.

The monuments are spots where Mary Slessor was buried and the house she lived before her death situated around Ikot Oron/Itu village in the state.

The boat yard is located behind Lugard’s house, it is a large boat yard where merchant ships were built and repaired. There exist some old boats and canoes of all sizes in the yard which is an indication of the extensive businesses carried out in the area in the past.

The sculptural monument was erected to commemorate the heroic sacrifices of women killed in the famous women war of 1929 against the imposition of tax on women by the colonial government.

The state is situated in the north of the Equator and within the humid tropics and its proximity to the sea makes the state generally humid. The state has a very calm tropical climate, marked by two distinct seasons – the rainy and dry seasons.

The state experiences abundant rainfall with very high temperature and the mean annual temperature of the state lies between 260 C and 280 C, while mean annual rainfall ranges from 2000 mm to 3000 mm, depending on the area. Maximum humidity is usually recorded in July while the minimum occurs in January. Thick cloud cumulonimbus type is commonly experienced in the months of March to November.

The climate of the state allows for favourable cultivation and extraction of agricultural and forest products such as palm produce, rubber, cocoa, rice, cassava, yam, plantain, banana, maize, and timber.

Be the first to leave a review.

Your browser does not support images upload. Please choose a modern one

This will close in 60 seconds